Ever since rumours of some new future iPad also supporting a first party stylus started flying around, some people in the Twitter-sphere seem to be way over excited. But not because they’d want to buy one, but due to a chance to call out Apple for hypocrisy. Let me explain.

Common knowledge is that Apple and especially Steve Jobs, when introducing the iPhone, heavily criticized all the styli and devices requiring them. Following the Internet logic further, we find that if Apple now ships a stylus, they are not sticking to what they once declared, right? Hypocrites?!

Err, no. No one ever said that all devices that can make a use of a stylus are bad. Just the ones for which you need a stylus suck.

Most people can’t imagine what the “smartphone” situation was back in 2007, when the original iPhone was introduced. To borrow from Jobs’ legendary keynote, this is what the market looked like: 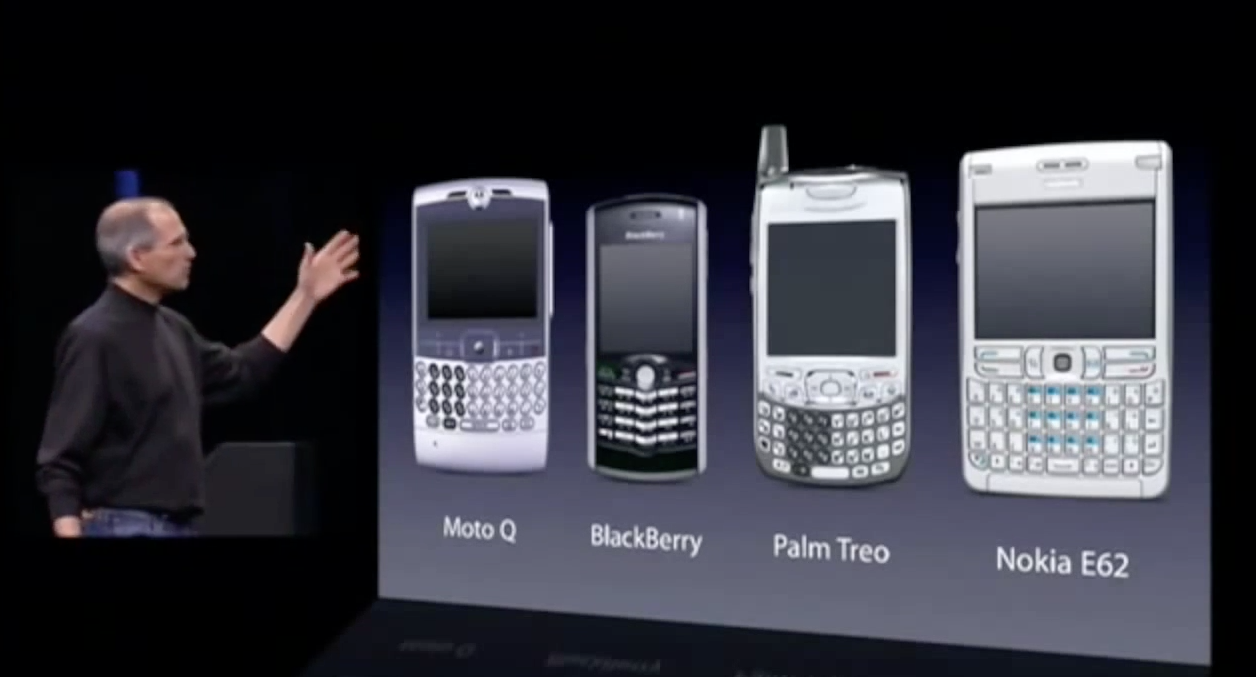 Back then, if you were lucky enough to have a touchscreen on a smartphone, it was most likely a resistive screen, for which you basically needed a sharp kitchen knife to operate efficiently. Trying to use it with your soft fingers would result in frustration, to the point of growing an unnaturally long index fingernail to substitute a just-lost stylus (way too common).

In those times, a stylus was a requirement with such a smartphone. You couldn’t use anything else to operate your phone, let alone your finger. That’s what Jobs passionately criticised.

Now, look at today’s iPad Air 2. It is an amazing device, made to be operated primarily by your fingers. No compromises, finger is the preferred input device for it. However, since the iPad has become a device of creation for many people, including me (I used it to take notes at uni), using a third-party stylus for handwriting has become a standard as well. I myself used an Adonit Jot Pro - it performed really well at handwriting. But I never used it to stab at the screen in all apps. The stylus is not required for me to take a full advantage of my iPad.

The point is, even _if_ Apple ships an optional stylus with the new iPad, it doesn’t mean they still don’t think that stylus-requiring devices aren’t a terrible idea. They are. However, a little first-party benefits of handling raw touch data instead of getting already processed (and delayed) data from UIKit’s UITouch, might actually make such a stylus a very precise input tool for certain use cases, such as handwriting and drawing.

There. I really hope that people just stop repeating the incredibly misinformed narrative of Jobs would have never allowed Apple to ship a stylus, because he criticized them in his keynotes (I even had to skip one podcast episode today because the hosts were following this exact line. Ugh.)

If you ask me, I hope they do come up with a stylus. I’d love to use one with my iPad for drawing diagrams. But even if they do, I will never abandon the best input devices I still have 10 of and are the only real requirements for an iPad: my sausage fingers.